Race for the Case: Back to School Philanthropy with Cartoon Cuts

The summer is flying by way too fast and as I looked at the calendar this morning, I realized school starts in just 5 weeks! School supply displays started popping up in stores a few weeks ago to remind us a little too early. Soon, I’ll be getting out my daughter’s supply lists and taking them shopping to pick things out but unfortunately not everyone is able to purchase items on their child’s supply list so easily. 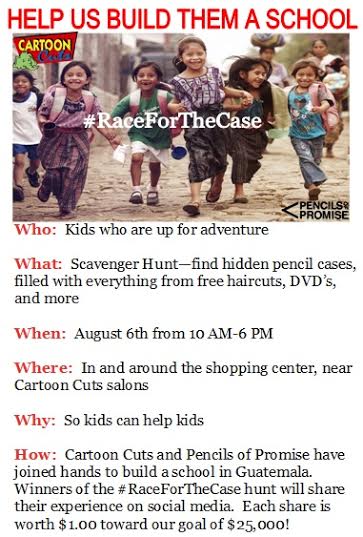 Cartoon Cuts, has partnered with Pencils of Promise (PoP) to raise $25,000 to build a school in Guatemala. PoP is a for-purpose organization that builds schools in developing countries in addition to providing scholarships, teacher support, and water and health programs. Since its founding in 2008, PoP has built more than 200 schools.

On August 6, 20 pencil cases filled with pencils, combs, free haircut cards and other freebies will be hidden around each shopping center with a Cartoon Cuts salon. Clues will be given out via social media, and the winners will be announced on the company’s website. The pencil case winners will share their experience on social media using the #RaceForTheCase, and Cartoon Cuts will donate $1.00 for each social media post. In addition, during the busy back-to-school month of August, Cartoon Cuts customers will be able to purchase pencils for a suggested donation of $1.00 each – the proceeds of which will go toward building the new school.

Can’t make it to a Cartoon Cuts salon on August 6? Don’t have one in your area? You can also help the Race for the Case via social media. For each social media post using the hashtag #RaceForTheCase, Cartoon Cuts will donate $1 to PoP.

Click here to find a Cartoon Cuts salon in your area!

No Comments
POSTED IN: Cartoon Cuts, Pencils of Promise, Race for the Case